SI Club of Bangsar has links with clubs in 3 Federations. 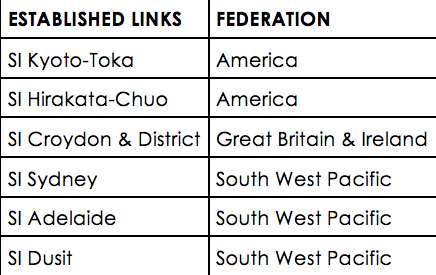 In 2004 the then SISWP President, Eileen Mitchell had randomly linked clubs with the theme, ‘Together we can make a difference’, to begin a project. SICB was linked to 4 other clubs namely SI Townsville Breakwater, SI Tropical Tablelands, SI Broome (Australia) and SI Christchurch (New Zealand). There was correspondence for only a year with SI Christchurch.

There has been active correspondence with SI Sydney and SI Kyoto-Toka.

Members of SICB had met up with SI Sydney members at SWP Conferences and SI Conventions participating in Friendship Link activities sharing information on club projects.

With SI Kyoto-Toka there has been partnership in a project. In 2005 SI Kyoto-Toka member visited SICB and donated RM3300 to the Region of Malaysia for the Tsunami victims in Kuala Muda, Kedah. In February 2006, 6 members from SI Kyoto- Toka visited the sight of a joint ‘goat project’ in Janda Baik. The Club donated RM15,685 (50,000yen) for the goat project in conjunction with its 15th Anniversary. President Masako Takahashi handed over 33 goats to 13 indigenous families in Janda Baik. In 2007 the donation of RM1,500 continued for the project. Additional 4 goats were handed to the OA goat breeders from this donation.

In December 2007, Japan Chuo Region selected SICB as one of the 2 recipients of the Grant of Friendship to participate in a seminar to be held at the Region Conference in April 2008.

In March 2008 a new link was established with SI Dusit, Thailand of SWP.

With SI Kyoto-Toka, however there was a joint Goat Rearing Project. Both clubs harnessing their strength on a common objective to eradicate poverty among the marginalized indigenous community in Janda Baik have successfully improved their quality of life. The community which depended solely on jungle products for livelihood 6 years ago, is today able to cultivate vegetables and tropical plants for sale, rear chickens, breed goats and produce handicrafts made from rattan and bamboo.

SI Kyoto-Toka donated JY 500,000 which was used to buy 33 goats that received blood screening and official approval from the Veterinary Department.

On 27/8/2007, SICB members assisted Penumbra in organizing the Hearts of Lebanon Charity Concert at the Renaissance Hotel in aid of Yayasan Harapan Kanak Malaysia and the Lebanese children. On 1/9/2008 our Friendship-Link convenor accompanied 7 Lebanese children on a day trip to a theme park, The Sunway Lagoon.